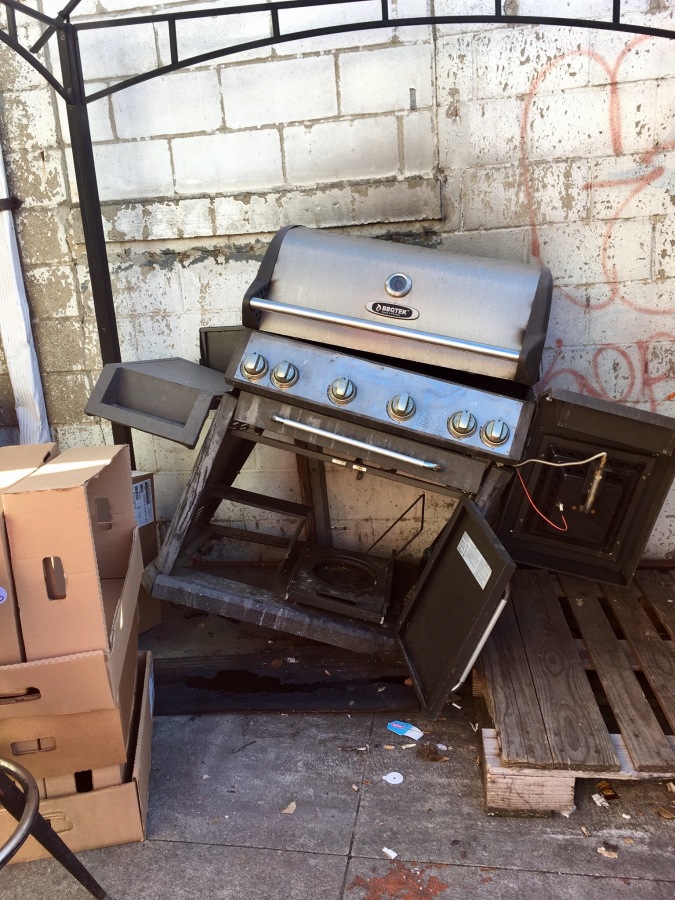 “Tell people someone tried to take out Big Ant’s BBQ!”

Big Ant works security at Caesars Windsor. He also helps out at a homeless shelter. I’m not sure of his title but he oversees operations several days a week. His claim to fame though is his cooking, specifically, his love of barbequing!

When Big Ant’s in front of the BBQ, he never stands taller. And, he’s a tall presence in the first place. Big Ant has created his own secret BBQ sauce and will enter into any BBQ competition available. He stands by his sauce to be the best!

The November weather has remained warm enough that he hoped to enjoy a few more days of barbequing this fall. Well, those hopes came to a crashing halt on Saturday night.

The BBQ is situated outside a side entrance to the shelter which leads to an alley between an Iraqi  restaurant and a Lebanese Restaurant. On Saturday night, a car raced through the alley and smashed into a parked car. The parked car collided with a  skid which plowed into the BBQ. Things will never be the same with that BBQ again. The racing car sped away. A hit-and-run! Which just so happened to be recorded by two security cameras of the shelter.

Still, good things happened. A police cruiser pulled up into the same alley less than two minutes later to retrieve food ordered for pick-up. Pieces of the parked car were scattered in the alley. People had already gathered to clean it up.  A policeman called in the information about the errant car. The driver was located.

It was also fortunate there was no explosion! The BBQ is gas-fueled. As well, the speeding car missed hitting the homeless shelter’s large new van which was also parked in the vicinity.

Things could’ve been worse. For now, the BBQ stands lop-sided, an innocent victim of a hit-and-run.

And, burgers will be pan-fried for the time-being.