I looked ahead and saw  my lane ended soon. Very soon! I sped up to pass the vehicle beside me. Vrooommm! I couldn’t believe I didn’t allow plenty of time for getting my daughter to her driving test. Now, it appeared construction lay ahead.

“Giselle, whatever you do on your test, don’t do what I just did.”

I know the city of Windsor encourages zipper merging but I think it’s generally frowned upon to speed up and practically cut someone off. I made a left turn at the next light and ended up in the curb side lane. The light may have turned from yellow to red, too. Maybe.

“Don’t do that either, Giselle!”

Giselle’s had an interesting driving career. On her very first lesson, booked after a day of college classes, she got behind the wheel of a driver’s ed car. The instructor told her, “Just drive!”

Giselle tried to explain to him she wasn’t comfortable with so many people and vehicles around the front of the college. That she wanted to learn in an empty parking lot first. He repeated, “Just drive!”

The tire popped as it hit the curb! The instructor was angry. The driver’s ed company insisted we pay several hundred dollars in repairs. We didn’t agree. And, we didn’t pay!

When Giselle attempted her first road test, her examiner was a woman feared by many. A middle-aged stern woman. Giselle’s anxiety increased knowing she had the examiner with a reputation for failing candidates.

Giselle tells me the woman barked orders, “Turn here! No, here! Not that way! Here!”

It was too much. Giselle says nobody is supposed to yell when she’s driving. She drove barely two blocks when the instructor told her she failed already and to head back. This destroyed Giselle’s confidence for a long time. Even the car’s navigation system politely says, “Turn right when it’s safe to do so!”

Now, it was years later. Giselle’s married and the family vehicle is a big truck. Her hubby calls it The Blue Goose. I call it a beast of a truck and a nightmare if you’re new at parallel parking. Although Giselle is quite confident at driving the truck, for her road test, she opted to drive my little red Kia Rio. Let’s just keep it simple!

My husband, Guy, taught the art of parallel parking to Giselle the week prior to her test. Why learn early? He put our huge Herby Curby garbage can on the road. Giselle was to pretend it was a car she was to park behind. Guy initially planned to have me stand there but decided to use the garbage can instead.

Giselle only hit it twice Guy told me. Giselle told me she did just fine. I figured it more important to keep her confidence up so congratulated her on learning so quickly.

The next night, they drove down the side street and she practiced parallel parking eight times. No cars were hit. Guy even had Giselle parallel park behind his beloved sports car. Not a problem!

The day arrived. I drove from Windsor to Chatham where Giselle resides. I mentioned when her sister took her road test, she just treated it as a learning experience with no expectations. If she passed, awesome! If she didn’t then she’d simply re-take the test.

Giselle was with the examiner for barely eight minutes! Uh, oh… was she sent back early! Nope! Giselle was exuberant! She passed! Have you ever seen a happier new driver? 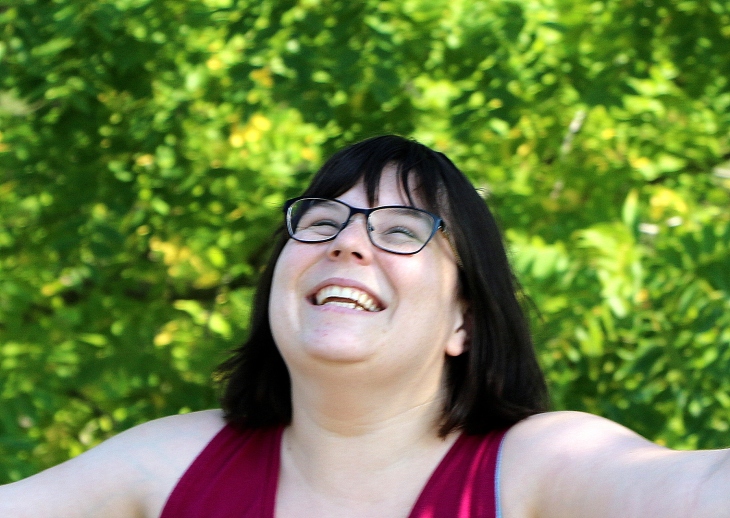 I am proud of Giselle. It may not be a big thing to many people, I know. But, to overcome anxiety, to face down a demon, takes confidence and courage. Way to go, Giselle, for handling the twists and turns not only of the road, but of your life!

2 thoughts on “Conquering The Road!”