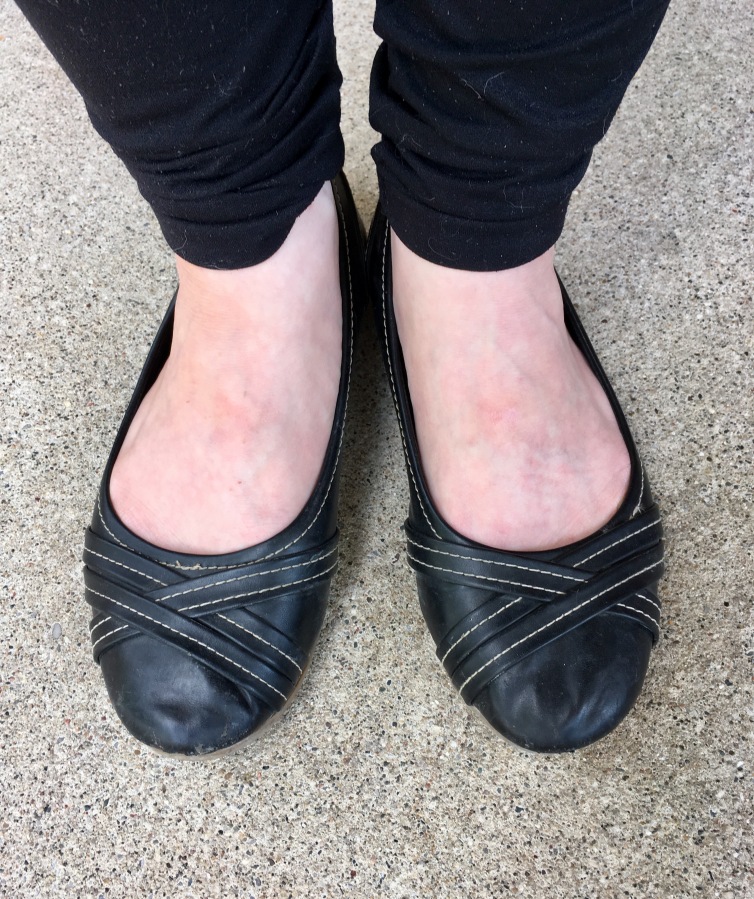 This post is an update about Nancy, from Their Shoes #43

“I’m falling through the cracks!”

I spent yesterday with Nancy. While I can’t say I walked in her shoes, I most certainly did get a better appreciation of her struggles. Nancy’s been living in an apartment shared with mice for close to 2 years. Nancy has received two notices of eviction—more like threats—but a formal application for eviction will be done this week as the notices expired today.

Nancy has been searching for an apartment for months. Early in her search, after not hearing back from a property manager about an apartment, Nancy was dealt the bad news. Her application was not considered because she allots more than 40% of her income from Disability to rent.

Of all the listings for apartments, most are for multiple tenants and have two or more bedrooms, with a price tag to match. Some apartments are simply above her budget of maximum $750. Of those within her budget, 75% are managed by property management agencies which use the formula to only include tenants allotting less than 40% of their income towards shelter. Another 10% of the apartments are in areas not easily accessible without a car, or in areas frequented by crack addicts and home to bedbugs and cockroaches. Nancy relies on walking and public transportation to access health care, obtain groceries, etc. Another 10% of the places are merely single furnished rooms with shared living spaces. That leaves 5% of the apartments listed which would might match Nancy’s needs for price, location and accessibility.

Today was a very rough day. Nancy’s CMHA (Canadian Mental Health Association) worker had a shopping list of Nancy’s faults and failures. She was ending the relationship with her, after hinting at it for months. Unfortunately, Nancy’s coping strategies were at their lowest. She’s dealing with two legal issues, a minor theft of something dear to her and, of course, the fear of being homeless is forefront in her mind. Nancy’s CMHA worker fired her after she blew up at her. Then, Nancy had a mini-breakdown. That’s about when I was called.

I encouraged Nancy to move forward and, “Let it go!” for now. To stop beating herself up. She needed to eat and get herself together as she had a housing appointment and an appointment to view an apartment. She was ready to check herself into a hospital at the time. Heck, I was ready to check her in, too. But, her homeless problem wouldn’t get solved from a hospital bed. And, she’s been down that road before with little mental health support being offered for hours on end.

At the housing registry, forms were filled out and surveys were conducted. It appeared help would be available as Nancy scored a 7/10 to fit into the category for Rapid Re-Housing. This sounded very hopeful. Then…the catch! Since she wasn’t homeless yet she was not at the top of the list. She needed to be homeless and was given a list of two shelters for women. Nancy’s mental health issues would not easily permit her to live there. She has a fear of germs and bedbugs, especially. And, of getting her belongings stolen. Plus, she has two small birds.

Nancy asked how long the waiting period would be to find subsidized housing if she was homeless. Are you ready? SEVEN YEARS! This led to another session of tears and despair. Too many nights have been spent curled up in the fetal position, crying.

Arrangements were made with her parents to take her in for two days until she feels stable enough to be at her current apartment in close proximity to her landlady. (There were 10 e-mails ranging from complaints to mediation, sent by the landlady to Nancy in a span of 8 hours.) Her parents and Nancy know they have their differences and all realize this is a temporary situation.

Nancy’s boyfriend is unable to take her in as he shares a home with his sister and her boyfriend and is committed to his share of the rent. There’s no room there for a fourth person on a long-term basis.

The apartment viewed later in the day was ideal. It’s in an apartment building that’s clean and safe; it’s close to where Nancy’s boyfriend lives, and is nearby Nancy’s doctor, pharmacy and grocery store, as well as being on a bus route. The landlady was not a property manager with a set formula for calculating if the client is a good fit. And, the apartment is the same price as Nancy is now paying, at approximately 65% of her disability income.

Nancy was informed she would hear back shortly if she “got” the apartment. Everyone is hoping for the best. In the meantime, a plan was made for the next day to try to get back into a CMHA program and learn about any available housing, to touch base with the two law agencies that are assisting her, to obtain counselling at a crisis centre or walk-in counselling clinic, and to see a doctor.

For tonight, she sleeps away from the stresses with her two birds at her bedside, in hopes she is approved for the apartment. The problems will all be there tomorrow but with a good night’s sleep, the stress will be better-managed.