Application for a former bowling alley to be used as a licensed producer of medical marijuana.

The stack of hand-outs for the meeting stood over 2” high.

I wondered what time city council meetings ended. Judging by the agenda, it looked like matters could go on forever. This was my first-ever attendance here. I’d brought my daughter, Monique along for moral support. She was more of a social activist than I, and often attended such meetings during her Journalism schooling.

There was a lot of opposition to the townhouses. Neighbours were complaining, getting louder with each word spoken, citing the “transient nature of renters”. They feared the value of their homes would decrease. 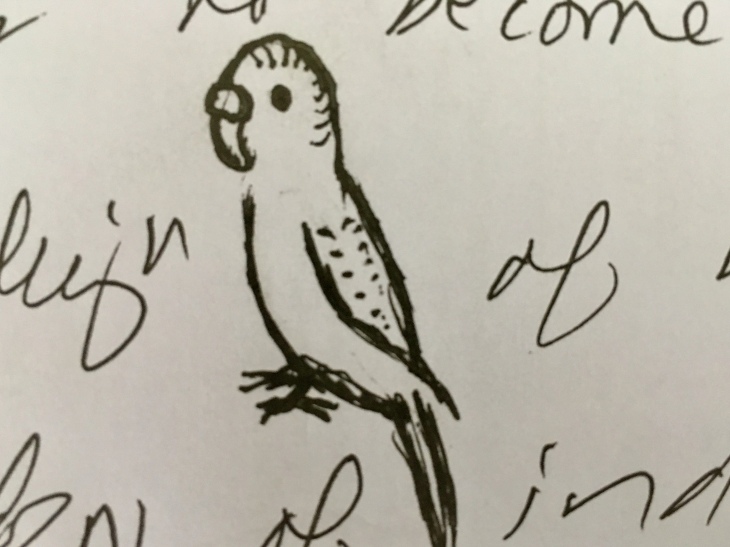 up until the outrageous zoning issues began.

I whispered to Monique, “There’s townhouses in Forest Glade, all types of housing. Diversification never hurt us any. People want to live where we live. What’s wrong with these people?”

Monique answered, “This is how people cause ghettoization.”

A builder for a plaza wanted a mid-block entrance. The builder and neighbours wanted local businesses: a chiropractor, a little café. Several people stood up and demanded, “No Tim Horton’s! No national businesses! We don’t want that traffic.”

Apparently, there were a lot of accidents at one of the intersections. I thought stopping for a drive-through would slow traffic. That could be a good thing. And, how many plazas in our city are empty?

I passed Monique a note written on my handy stack of papers: 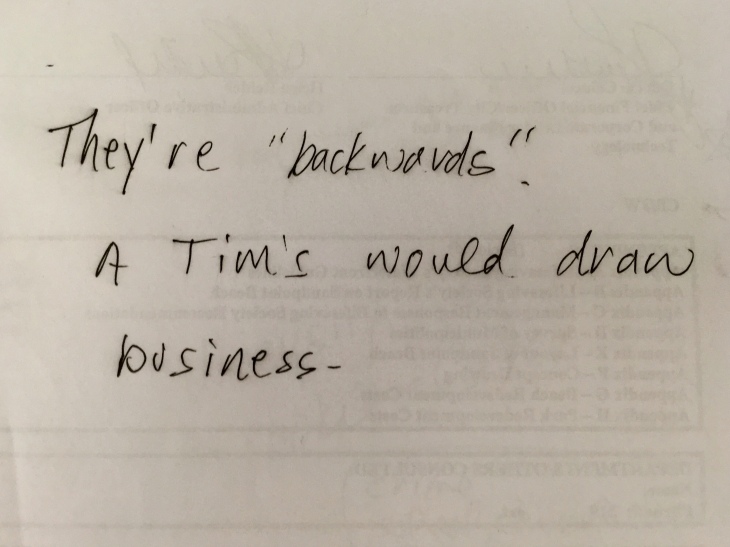 Now, they wanted a Starbuck’s. Yet, they just said no national chains. I thought the issue was the entrance, but they’re focused on the tenants, now.

Finally, the issue we came to hear was brought up. John Button requested to have zoning amended so the house he has on Drouillard Road can be converted into a recovery home for addicts. Other people wanted this amendment denied.

Oh, boy, this was getting heated, now! Someone asked: “Who is certified to oversee the clients? What will be done at night? What will the clients do in the day?”

The members of the BIA (Business Improvement Association) of Ford City said they supported John but, not in his chosen location.

Another case of not in my backyard!

A spokesperson from the agency, Drouillard Place, said they met with John and proposed three options.

He could move the recovery home to a residential area.

He could rent out part of the home to a business.

I gathered that the third option, which I couldn’t hear, was not ‘you can have the recovery home here’.

People stressed that they worked so hard to come this far and this would be a step backwards for the BIA. They felt the location of a ‘dry house’ in a business corridor was not ideal. An agency, Drouillard Place, already provided health and well-being programs, a social worker and a food bank for those in need.

Another person stated she could put John in touch with a real estate person to find a different house in a residential area and to find a buyer for his home. Another woman said if John had asked prior, the BIA would’ve helped him find a home.

The last eloquent opponent to speak said she liked the residential look of 1052 Drouillard Road. She said she envisioned sliding glass doors leading to a patio, and ice-cream being served to patrons there.

I’m not sure if it was a city planner but a city official stated the area is zoned for “mixed use”: commercial and residential. That the building falls within the parameters of existing zoning.

Roger, a man on the board for the proposed recovery home, requested the change in zoning to help recovering addicts. The home would offer them affordable housing, peer support, and a safe place to recover with like-minded individuals. Helping these people would save money on police services, too.

Roger mentioned the proposed recovery home looks just like a house and there are already several residential homes in the same area. The home has been used in the past for many programs, such as an AIDS centre, methadone clinic and a women’s centre. There is a ‘gap’ in the Drouillard area for a ‘dry house’ and there is a need. He felt you shouldn’t put the revival of the human spirit over bricks and mortar.

John Button spoke how we need to consider the revitalization of the recovering individual just as important as the revitalization of the neighbourhood. That businesses shouldn’t fear the recovering addicts who would live there. They would’ve completed a course in rehabilitation or therapy. They can be reliable, trustworthy individuals who will make a positive contribution to society.

The home would have zero tolerance for any drugs or alcohol. Which may very well be found in other homes but not there. He stated that people are ill-informed, if they’re opposed to having the home in his desired location. That people in recovery need to adjust to living in the area, and to be supported while they do so. There would be random drug testing done to ensure sobriety. If a drug test was failed, the individual would relinquish their spot in the recovery home and must go to detox before being able to return to their spot in the home. The ‘dry house’ would provide a place for the recovering addict to build up strength to return to his own home.

John spoke of how he did not want to move the recovery home a street over. It needs to be a lighthouse—a beacon—for people seeking recovery. There may be only a ten-minute window available when a person is struggling. The home must be in a prominent place on Drouillard Road, for that very reason.

When it was time for the city councillors to voice their opinion on amending the zoning for the proposed recovery home to be located there, my heart quickened.

One councillor voiced that it was not a matter of taking sides, but of acting on what is fair. He said since the city planner had no issues with it, he voted against the denial for re-zoning. Yeah!

Another councillor stated we must do what we can to help these people. Yeah!

Another councillor voiced his concerns…why didn’t John just move to another area since the BIA would help him sell his house and find a new one. He said there’s no reason why the home couldn’t be a block over. No!

How would he feel if someone suggested he sell his own home and move one street over?

There was a councillor who asked who is to say John wouldn’t meet with the same opposition or worse if he moved. More support for John!

But, alas, the vote was 5-3 in favour of denying the re-zoning.

Outside the boardroom, my daughter and I introduced ourselves to John. We told him we were sorry that things didn’t go his way. My daughter and I were surprised at John’s response.

“No, listen, it’s all fine. Did you see that? We won over three councillors. I have plans. Instead of helping five people in recovery, I might have to change things…and help, thirty to fifty people seeking recovery. People want to see a business there and people eating ice-cream? Well, we’ll do that. Have a drop-in centre for recovering addicts with programs in the daytime and offer activities at night. They were worried about dealing with five people. Well, now, there may very well be thirty to fifty people.”

I’ve said it before. John Button is a man on a mission. He’s determined to help recovering addicts, one way or another. With God behind him to fight his battles, this is what he has to say about his opponents: “Their arms are too short to box with God!”

No one observing us would’ve assumed things didn’t go John’s way inside the boardroom. We were all jubilant leaving the building. John is a charismatic person and joy radiates from him. It was contagious!

Trust that when the answer is ‘no’, there’s a better ‘yes’ down the road. I can’t wait to see what develops next!