There are three types of people in the world. Those who embrace baking cookies for Christmas and excel at it. Those who don’t have time to bother and think nothing of buying Christmas goodies. And then there’s a group of people that think, “Oh, it would be great to bake cookies!”—despite it being a challenge for them.

That third group lists me as a long-standing member. I thought it would be nice to do some baking to give to my daughters and their families. Guy (my hubby) and I planned to cut back on presents this year, and baking seemed like a gift from the heart. Homemade gifts mean so much more, don’t they?

My girlfriend posts beautiful pics on Facebook of her Christmas baking and when I saw a plate of her ginger spice cookies, I was inspired. Not decorated gingerbread cookies—icing them could be a nightmare!—but a cookie that resembled a sugar cookie yet had a spicy kick to it. I googled a couple of recipes, and chose the simplest, most basic recipe I could find: Spice Cake Cookies!

With only four ingredients, I figured I could do no wrong. Just a box of spice cake mix, vegetable oil, eggs, and vanilla extract.

I am a busy person so baking adventures usually start late in the evening. A lesson I learned was to make the dough and chill it overnight. The next evening could be dedicated to baking. Cookie dough is more manageable when well-chilled, and a messy kitchen is not as overwhelming when broken down into two nights. It’s taken me decades to learn that lesson.

I started out fine, enjoying each step of the way. Look at the swirls! 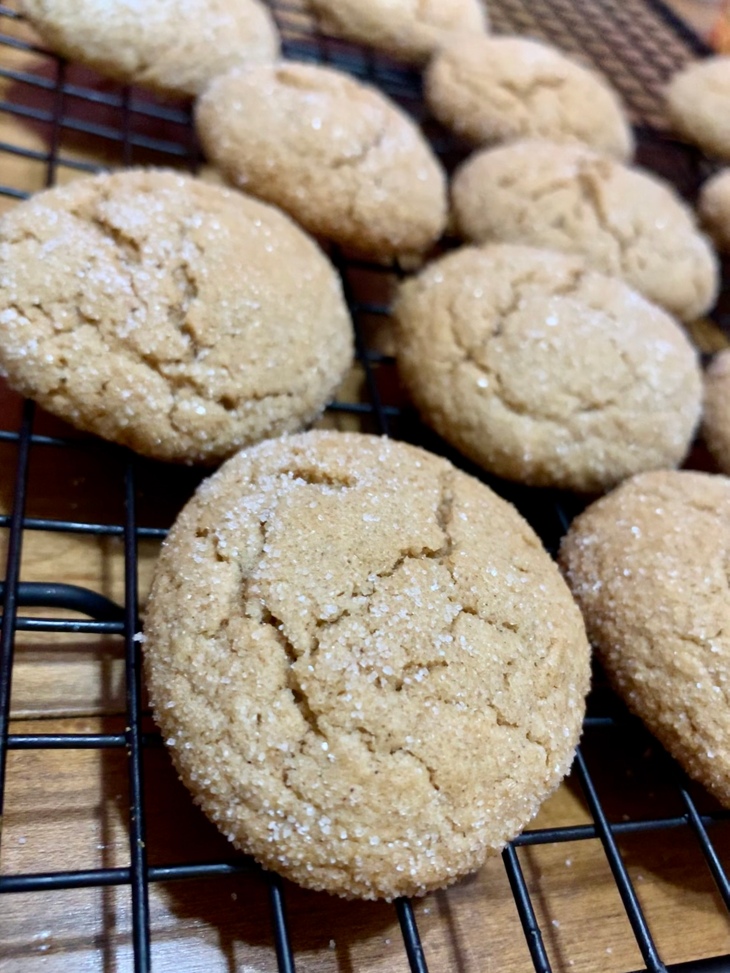 My “taste-test” cookie had an odd taste that I couldn’t quite pinpoint. I ate another cookie to see if I could decipher what the problem was but it escaped me. A third cookie made me wonder if they were even going to be good enough to give away. I put a couple aside for Guy for his lunch and froze the rest for Christmas.

The next morning, I asked Guy to sample one of the Spice Cake Cookies. He declined as he wanted to wait until lunch hour. When he picked them up, he noticed his hand was wet. Puzzled, he looked at the underside of the cookies. Oil was seeping out of them! What the heck??

I consulted my online recipe. It called for a half cup of oil. I searched for similar recipes. Ah-ha! They listed 1/3 cup of oil. I was ready to give up on holiday baking as I felt like a failure. I told my oily cookie story to my sister who is an amazing baker. She told me she bakes all of the time and sometimes recipes just do not turn out. She mentioned that since canola oil is usually light and tasteless, perhaps I should give that a try.

I went to the cupboard. I poured out a spoonful of vegetable oil. It tasted like my cookies, imagine that! Not quite rancid but not appealing at all. Not expired but identifying as such, haha!

I bought canola oil and a new box of cake mix. I sampled the canola oil. It was indeed light with hardly a taste to it. I made the cookies again, this time using 1/3 cup of canola oil. Verdict: yummy!

I recall reading how perfectionism can stand in the way of happiness. That makes sense because I was not too happy and was hard on myself after my epic fail. The article in Prevention magazine by Jennifer King Lindley, Learn To Let Go, even mentioned that the pain of humiliation may activate the same brain circuits as physical pain. Lindley suggested that people connect through the authenticity of imperfection, and to share failures. Oh, yes! I always got a kick out of Facebook posts comparing a Pinterest craft or baking with their failed attempt.

Lindley also suggests taking up something that you are bad at doing. This will build up your tolerance for making mistakes and help you realize they’re a normal part of learning. So, I carried on with baking.

I learned I do not have the knack for keeping Chocolate Chow Mein Noodle Cluster cookies at room temperature without them melting all over your fingers!

I texted my sister to ask the secret to get my cookies to garden. Luckily I saw the autocorrected “garden” instead of the word “harden.” She suggested putting them in the fridge/freezer or outside. I don’t think my daughters will really mind if they need to eat them straight from the fridge. I just wouldn’t advise giving them away as a hostess gift!

I learned I lack the knack for making uniform 1” balls for Buckeyes. These cookies are balls of peanut butter and icing sugar partially dipped in chocolate. 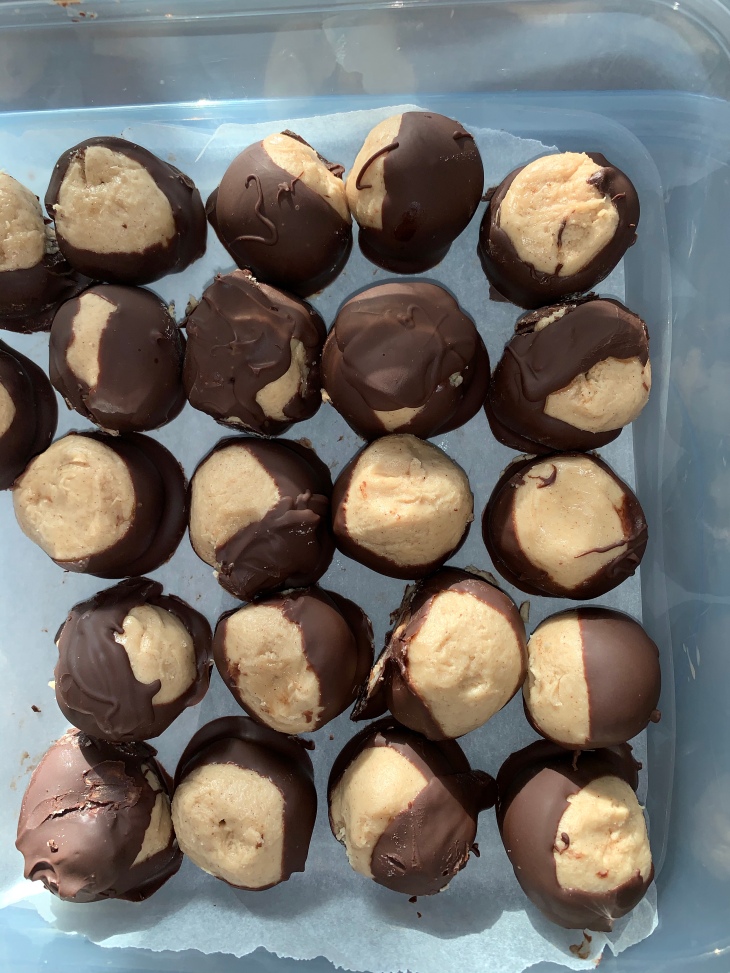 I decided that it’s better my way because sometimes you just want a little sample and other times you want a big Buckeye!

I learned recipients of cookies don’t really mind if the appearance isn’t perfect. I discovered one daughter prefers undipped Buckeyes which worked out as I ran out of chocolate for dipping.

Since some of my toothpick-stabbed Buckeyes fell straight into the pan of melted chocolate when the toothpicks snapped, I simply coated the entire ball which will please my other daughter, the chocolate-lover. The cookies resembled Turtles chocolates, and who doesn’t love those?

I learned the festive Cherry Chocolate Kisses looked a bit too perky!

And I learned I had no idea how to stack them in a cookie tin without losing their perkiness.

I learned baking is superb for stress relief as it requires concentration on the task at hand. This can free the mind of worries.

But, most of all, I learned not to give up. I had pitched the entire batch of greasy, oil-seeping cookies in the garbage and moved forward. I read up on troubleshooting for baking cookies. I bought an expensive baking sheet—at half price, mind you! I stored it in the oven along with my other old baking sheets. I preset the oven to 400 degrees for supper one night and yup, I forgot to remove the baking sheets ahead of time. Can you believe my fancy baking sheet set off the smoke alarm? It was on the lowest shelf and I scorched it.

I just had to laugh at my burned, expensive baking sheet. Because that’s what you must do. Laugh at your failures, and move on! That’s the way cookies crumble in life!

Happy baking! And a Merry Christmas to you!